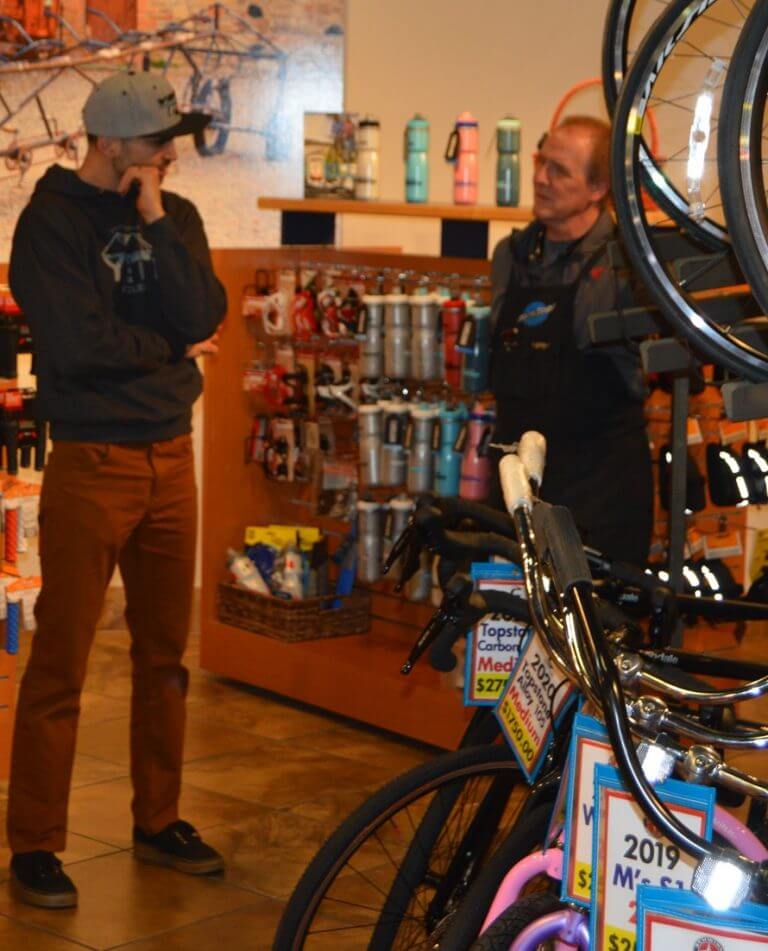 Mike Cox has always been drawn to adventure. As a working young man, he found himself sky diving, rock climbing, bungee jumping, car stereo tinkering, hunting and four wheeling. Through his years of exploration, Mike’s true passion has always been riding both mountain and road bikes.

During this time, Steph Cox was working her way through school at REI, and earning a Master’s Degree in counseling. Steph and Mike met through Steph’s brother, a rock climbing friend of Mike’s. Mike was running Digital Pre-Press, by day, and wrenching bikes at night at REI. One late night, Steph brought him chocolate chip cookies. And, the rest is history. They were soon married and now you know why there are always fresh cookies at our shop.

Steph began riding with Mike, and participating in competitive cycling, earning a tandem record. As they continued to meet other cycle enthusiasts, Mike also expanded his mechanical bike knowledge. They were soon inspired to launch a mobile bicycle repair business called Curbside Cyclery. He traveled around central Arizona, working on bikes and building his expert reputation. Mike was quickly recruited by the Health Net Cycling Team to provide mechanical support at major races all over the world. Over the years, he has also contributed his mechanical skills to numerous major cycling and Ironman events. As Mike’s popularity grew, many asked when he would open a shop. One of those people was Steph; before long, Curbside Cyclery had opened its doors as a family-run business. 19 years later, Curbside Cyclery is still Mike and Steph’s passion.

At Curbside Cyclery It’s All In The Family

Curbside Cyclery is a family business, committed to serving families. Cycling is the perfect family activity that promotes health, fitness and togetherness. Mike and Steph will always spend as much time as needed to make sure your family takes off on the right pedal. Every bike is guaranteed to be fitted correctly and set up to perform at its maximum level for each individual rider, no matter the age or ability.

Curbside Is Your Biking
Headquarters